How I got here

I had this massive cluster fuck last night and I ended up bricking my laptop (not really, but that is how I felt). I had triple boot at that time, an LTS Ubuntu, a beta version Kubuntu and Windows 7 installed on my laptop. A perfect setup, an amazing home away from home.
I decided to delete the Ubuntu LTS files to make some room in my drive. As I was removing the files from that partition, so I decided to delete the files from usr folder as it contains all libraries and stuff that isn't configured specifically by me (unlike /etc files). I did an rm -rfv to recursively and forcefully delete those files and also show me the verbose output. I went back to the browser tab I was working on, and in 10-15 sec I hit Ctrl+T (New tab) and the browser just failed to respond. The first thing that came out of my mouth was "Holy fuck". I knew from that very second that what a silly, stupid, nonsense mistake I made. I accidentally entered /usr instead of usr/. It is a natural habit because you never do usr/ in normal day to day life, you just type cd/vim /usr.

What is done is done. I knew that there was no way to go back now (Was there? Leave a comment).

So I decided to go head on with the situation. I had a plan about how I wanted my partitions to look in future, and how I will mitigate the damage next time such shit happens. But before all that I had to backup.

I created a live-usb drive. I booted into my system. Mounted my hard-disk, well whatever was left of it. I backed up all my important partitions with codes and other stuff. I actually did multiple backups, made several huge tar.gz's, copied them to an external hard-disk, copied them to a partition of internal hard-disk which was safe and I was not going to touch it either during this fresh install (It's fairly easy, people(noobs) just mess up the sda3, sda4 partition numbers, that's all). I also backed up all my code files on cloud, drive and dropbox. I am not exaggerating. That is what you do when your Internet connection has no bandwidth cap. It took me all night to do this. Making those tgz's is no easy task my dear even with a octa-core processor. I left the laptop on, made a script to log me in every now and then just in case my laptop reconnects to the wifi. Then the most important and toughest part I went to sleep.

Woke up in 4 hours or something. As soon as my backup was complete, I disconnected all disks, and stored them in a safe place. Next step was partitioning.

Oh my oh my, I don't want this to be like this ever again. So I decided to split the partitions. I always had a logical partition which was furthere divided into partitions as per my need. At the time of crash, I had recovery, Windows, and a logical partition with Data, Ubuntu-LTS, Kubuntu-Developer release, swap partitions.
This time I decided to go a step further. I seperated my home into one huge 60GB partition. I further created a seperate 40GB partition for '/' root and a 10GB partition for /var. I could have also separated /usr but I didn't feel the need to do so, because if I ever decide to install a new Linux I'm going to have to delete the /usr along with the root /. This is how I looks now:

How is the fedora world ?

Not much difference there. I installed Fedora 20 - Heisunbug with KDE Desktop Environment. Release version is always awesome. The developer release was way too buggy, but someone has to do the dirty work so that others may live their lives bugfree. This is how my desktop looks now. Not too fancy, but freakishly fast. In the end that is what matters.

Oh my, oh my. Since Fedora is on the cutting edge of kernel development, the driver support is so goddamn awesome. I have these bluetooth headset that never worked with my previous setup. They work like charm now. Also due to this awesome bluetooth connectivity it's also possible to play music via laptop's speaker once again. That used to work only on my old Ubuntu 12.04 system. My SD-Card reader slot, never worked on Linux before. Thanks to fedora that is fixed now.

The overall cpu usage is pretty low with this new setup, much lower load values as compared to the setup I just lost. Happy there too.

Well in one word - "Awesome". I was always afraid of moving to these redhat-like distros (Fedora, CentOS etc) because I was a apt-get guy. I spent years with apt-get, fixing its problems, handling weird situations it put me into. It was like that girlfriend you know isn't good for you, but you don't want to let her go because she is so close to you and you know her so well.


APT had those super cow powers but I had to let her go . I made the hard decision and I am thankful to myself for that. Now that I look back package management is much much simpler with yum as compared to apt-get. Dependency management is also much more transparent here. See this image below: 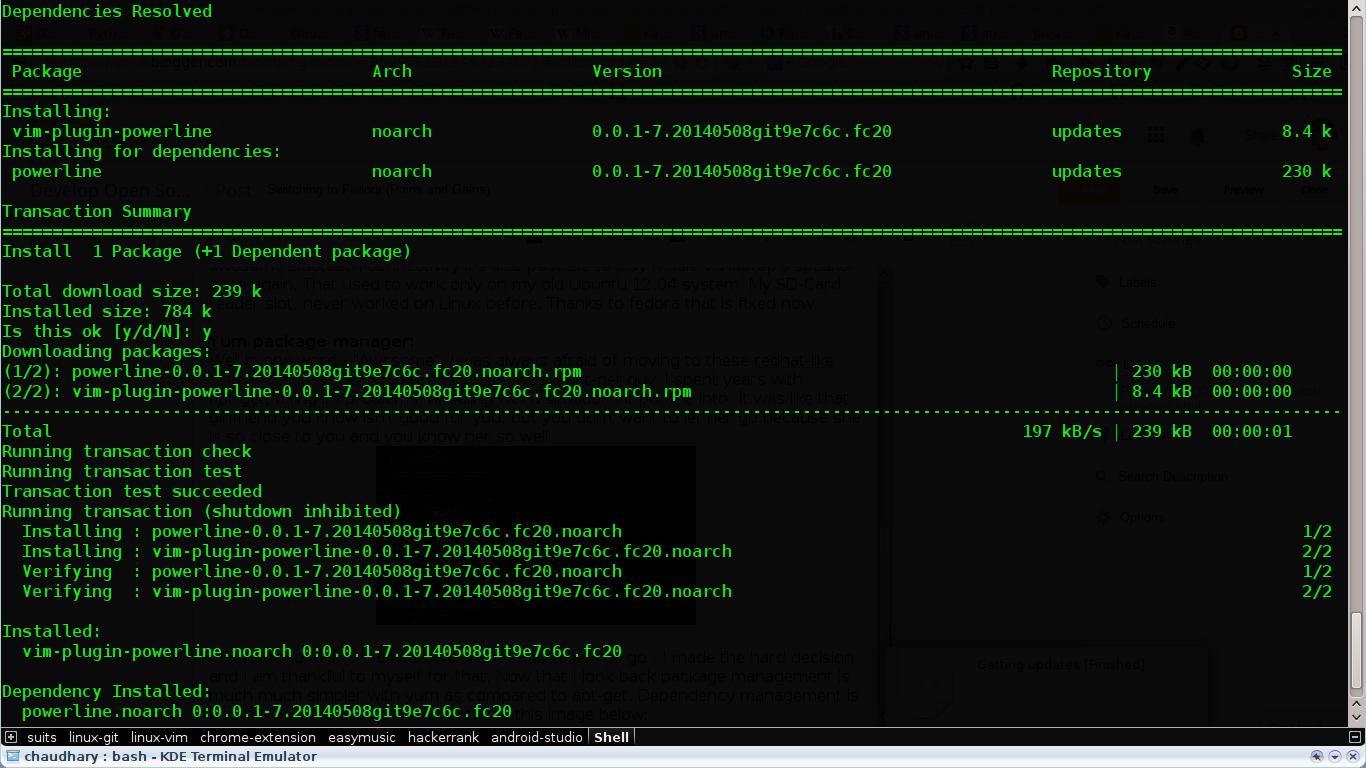 Isn't it much more cleaner than apt-get?


The amazing thing is I don't have anything to complain about. The name is the only thing that has bug (Heisenbug), everything else is just fine. This setup is working like a charm. I will definitely update this post if I face any problem, but I don't think that will be necessary.